Disclaimer: Many of the features presented here are rather new and can not be found in  the open-source version of Virtuoso.

Last time we saw how to share files and folders stored in the Virtuoso DAV system. Today we will protect and share data stored in Virtuoso’s Triple Store – we will share RDF data.

Virtuoso is actually a quadruple-store which means each triple lives in a named graph. In Virtuoso named graphs can be public or private (in reality it is a bit more complex than that but this view on things is sufficient for our purposes), public graphs being readable and writable by anyone who has permission to read or write in general, private graphs only being readable and writable by administrators and those to which named graph permissions have been granted. The latter case is what interests us today.

We will start by inserting some triples into a named graph as dba – the master of the Virtuoso universe:

This graph is now public and can be queried by anyone. Since we want to make it private we quickly need to change into a SQL session since this part is typically performed by an application rather than manually:

Now our new named graph urn:trueg:demo is private and its contents cannot be seen by anyone. We can easily test this by logging out and trying to query the graph:

Virtuoso makes use of the ACL ontology proposed by the W3C and extends on it with several custom classes and properties in the OpenLink ACL Ontology. Most of this little Turtle snippet should be obvious: we create an Authorization resource which grants Read access to urn:trueg:demo for agent http://www.linkedin.com/in/trueg. The only tricky part is the scope. Virtuoso has the concept of ACL scopes which group rules by their resource type. In this case the scope is private graphs, another typical scope would be DAV resources.

Given that file rule.ttl contains the above resource we can post the rule via the RESTful ACL API:

As a result we get the full rule resource including additional properties added by the API.

Finally we will login using my LinkedIn identity and are granted read access to the graph: 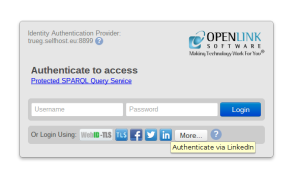 We see all the original triples in the private graph. And as before with DAV resources no local account is necessary to get access to named graphs. Of course we can also grant write access, use groups, etc.. But those are topics for another day.

Using ACLs with named graphs as described in this article requires some basic configuration. The ACL system is disabled by default. In order to enable it for the default application realm (another topic for another day) the following SPARQL statement needs to be executed as administrator:

This will enable ACLs for named graphs and SPARQL in general. Finally the LinkedIn account from the example requires generic SPARQL read permissions. The simplest approach is to just allow anyone to SPARQL read:

I will explain these technical concepts in more detail in another article.

14 thoughts on “Protecting And Sharing Linked Data With Virtuoso”